These are code snippets and notes for the fifth chapter, The Many Variables & The Spurious Waffles, section 2, of the book Statistical Rethinking (version 2) by Richard McElreath.

In this section, we go through different ways how to add categorical variables to our models.

The Problem with Dummies

In the simplest case we only have two categories, e.g. male and female. We are going to use the Kalahari data again to illustrate how to add binary categorical variables.

There is the variable male that consists of 0’s and 1’s. It is 1 if the individual is male and 0 if female. This is called an Indicator Variable or in an ML context also known as Dummy Variable. One way to include the male variable in our model is to use the indicator variable directly:

Now what happens in this model? If \(m_i = 0\), that is, an individual is female, then the \(\beta_m m_i\) term is 0 and the predicted mean (for women) is \(\alpha\). If however \(m_i = 1\) then the predicted mean (for men) is \(\alpha + \beta_m\). This means \(\alpha\) does not represent the average height of the total population anymore but the average height for one of our categories, in this case the female category. \(\beta_m\) then gives us the difference between average female and average male height.

Let’s simulate this from the prior:

The standard deviation of mu_male is slightly higher than the one for mu_female. 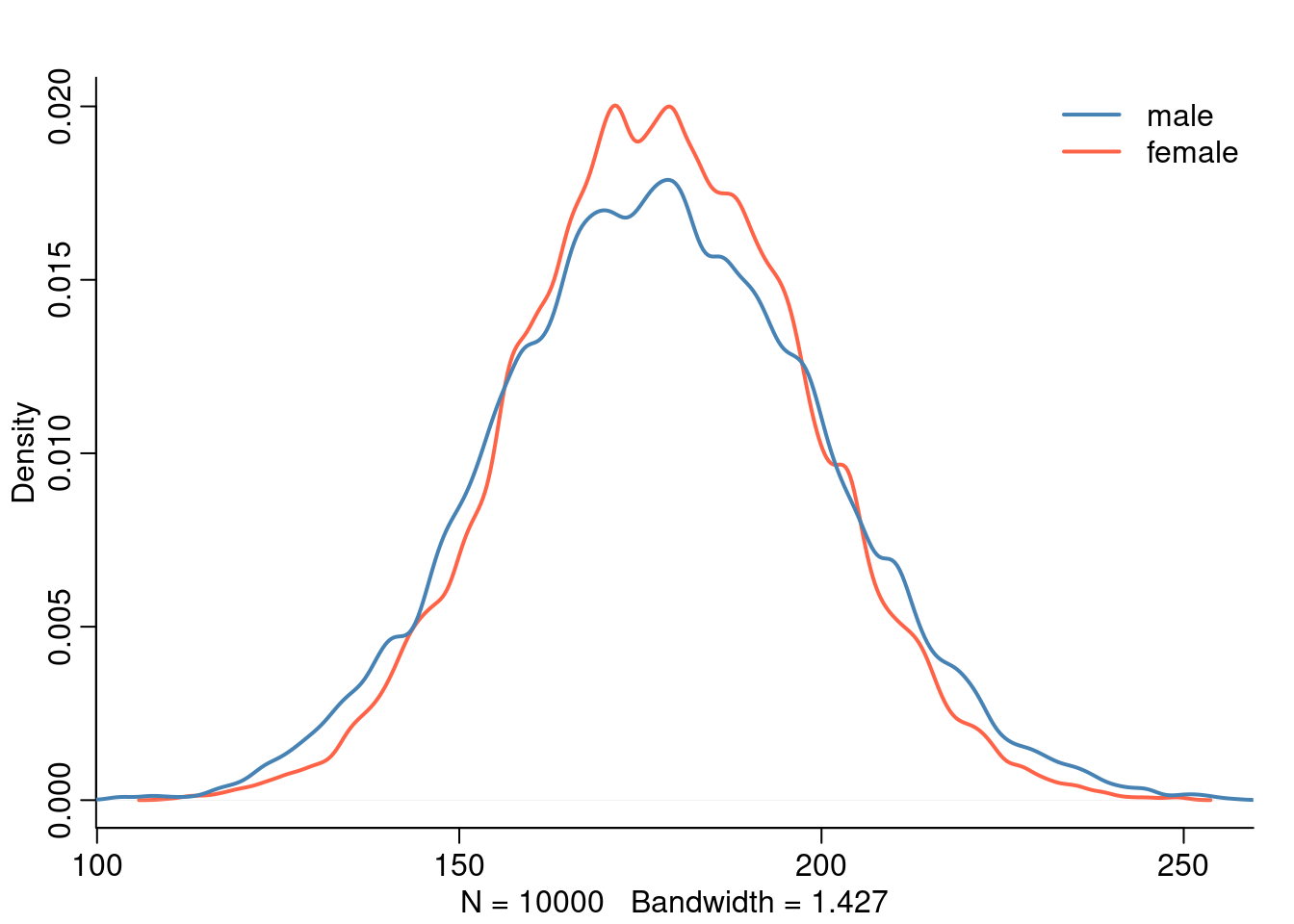 Instead of using dummy variables, we can also use an index variable.

We now fit one \(\alpha\) parameter for each category so \(\alpha\) is actually a vector consisting of \(\alpha_1\) and \(\alpha_2\). Now we can assign the same prior to both categories.

This kind of calculation, computing the difference, is also called a contrast.

Very often, we have more than two categories. If we wanted to use the indicator approach, we have to add new variables for each category but one. So if there are \(k\) categories, we’d need \(k-1\) dummy variables. This can very quickly become unfeasible and it also is difficult to assign reasonable priors to each. The index approach scales better in this case.

Let’s show this with an example using the milk data.

The variable clade encodes the taxonomy membership of each species. We can compute an index variable as follow: 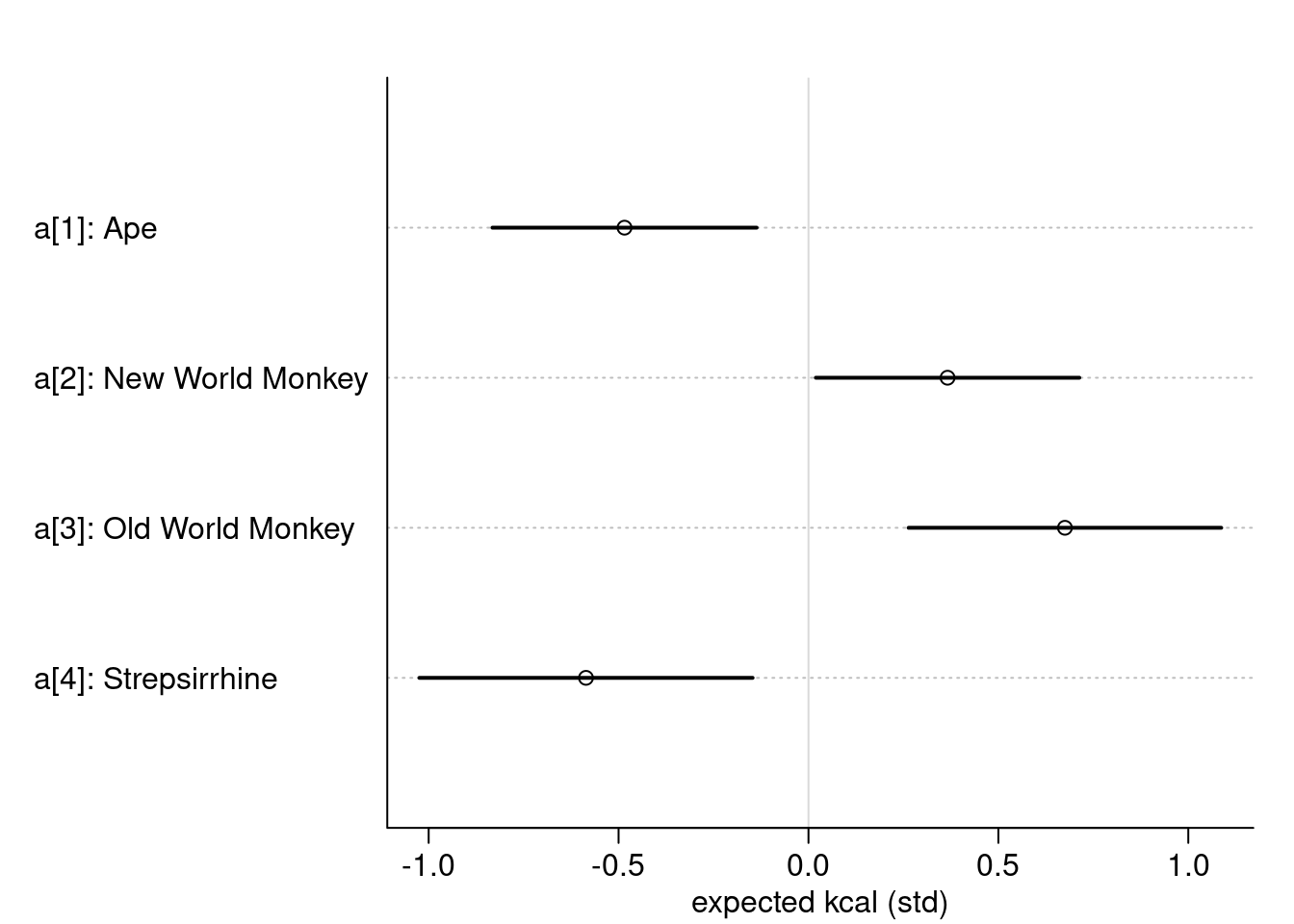 We can also add more than one categorical variable. Imagine, these primates would be sorted into the Harry Potter houses: [1] Gryffindor, [2] Hufflepuff, [3] Ravenclaw, [4] Slytherin. We could add this variable as follow: 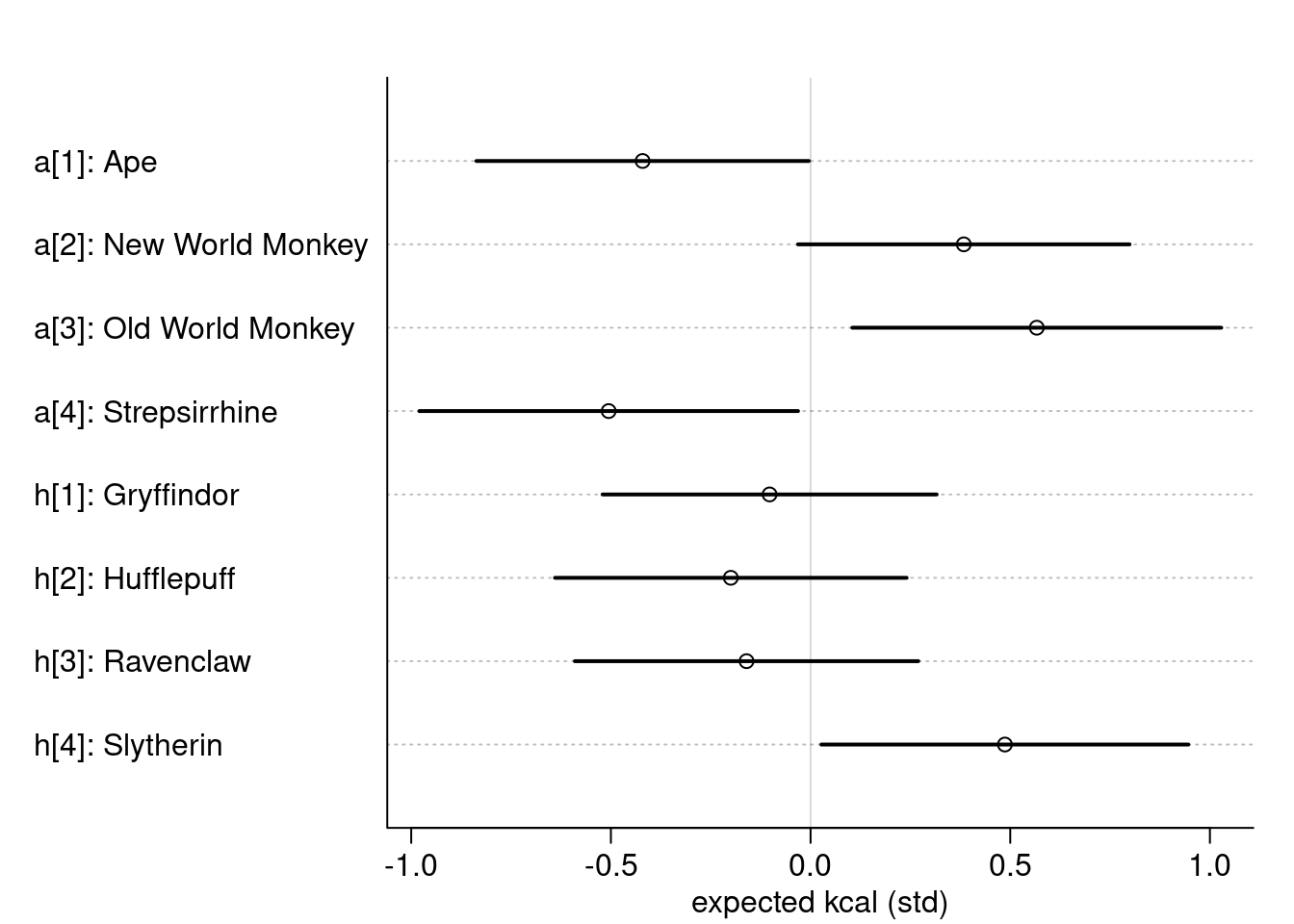 Using this random seed, only Slytherin has an effect on the expected kcal.

There are a few things to be aware of when working with categorical variables: