These are my solutions to the practice questions of chapter 4, Linear Models, of the book Statistical Rethinking (version 2) by Richard McElreath.

4E2. In the model definition just above, how many parameters are in the posterior distribution?

4E3. Write down the appropriate form of Bayes’ theorem that includes the proper likelihood and priors.

This big construct in the last line is then basically one big function that takes \(\mu\) and \(\sigma\) as input where \(y_i\), our data, is given (and thus fixed).

4E5. In the model definition just above, how many parameters are in the posterior distribution? 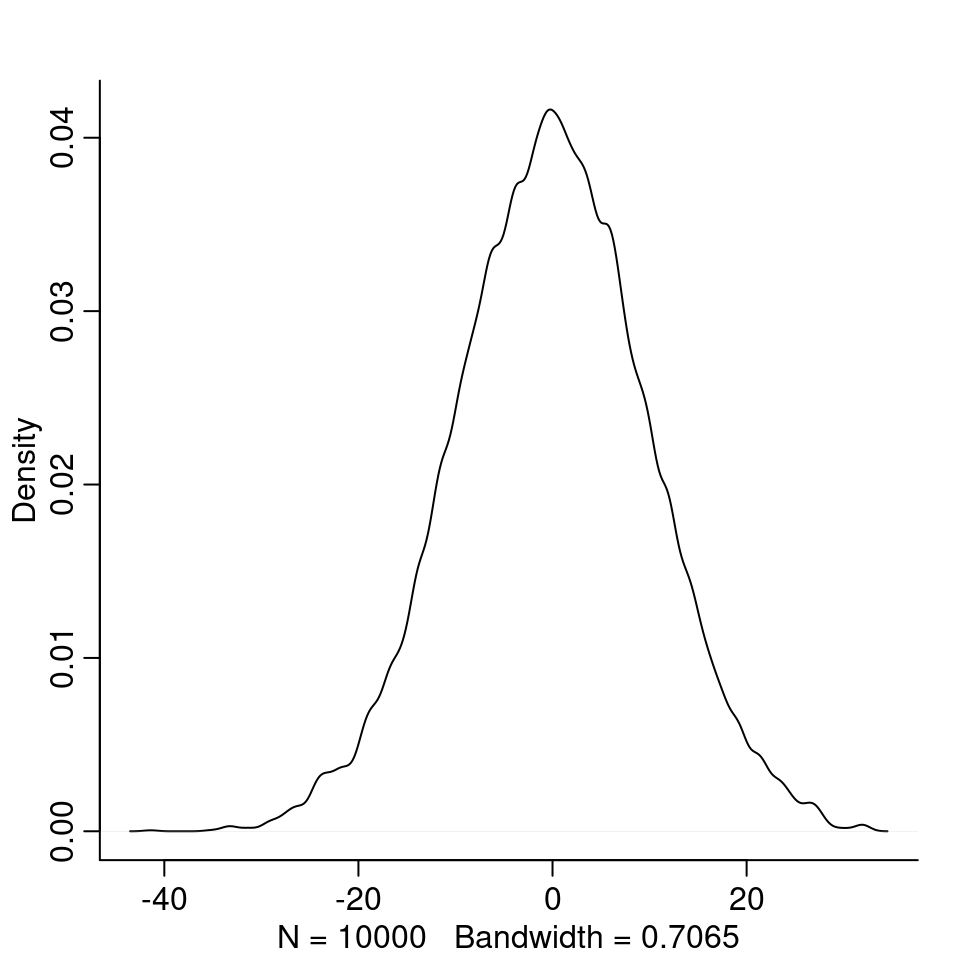 4M2. Translate the model just above into a quap() formula.

4M3. Translate the quap() formula below into a mathematical model definition.

We can also do a small prior predictive check: 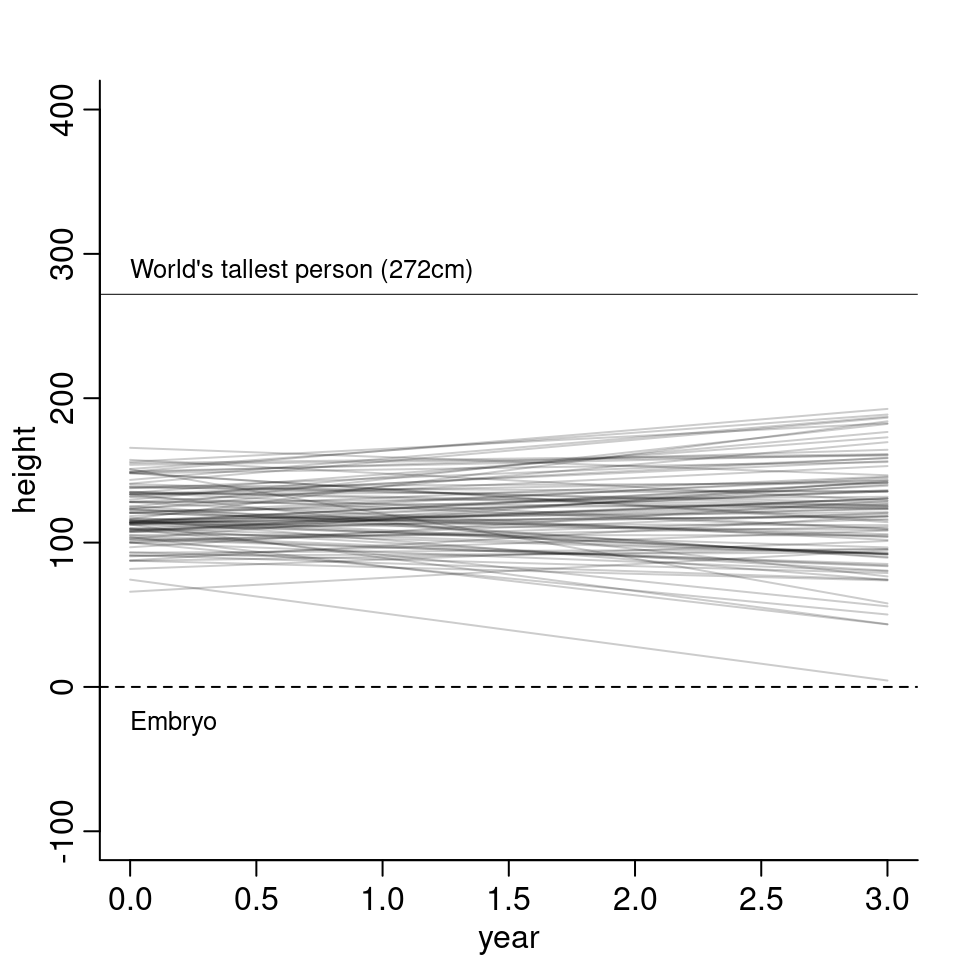 The model mostly stays between 0cm and 250cm. It still goes quite extreme and also has negative growth but otherwise it doesn’t look to unreasonable.

A short look at the predicted distribution of height at the first year: 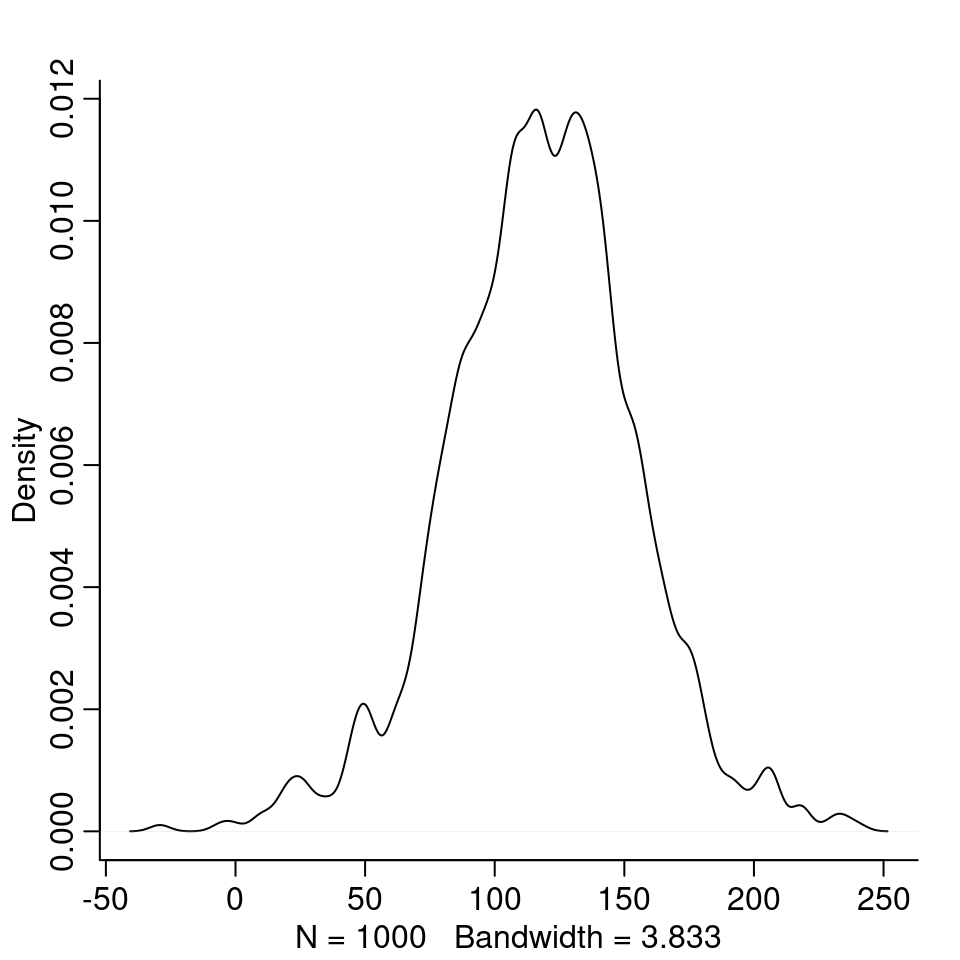 Most students at first year would be expected to be between 50cm and 200cm tall. 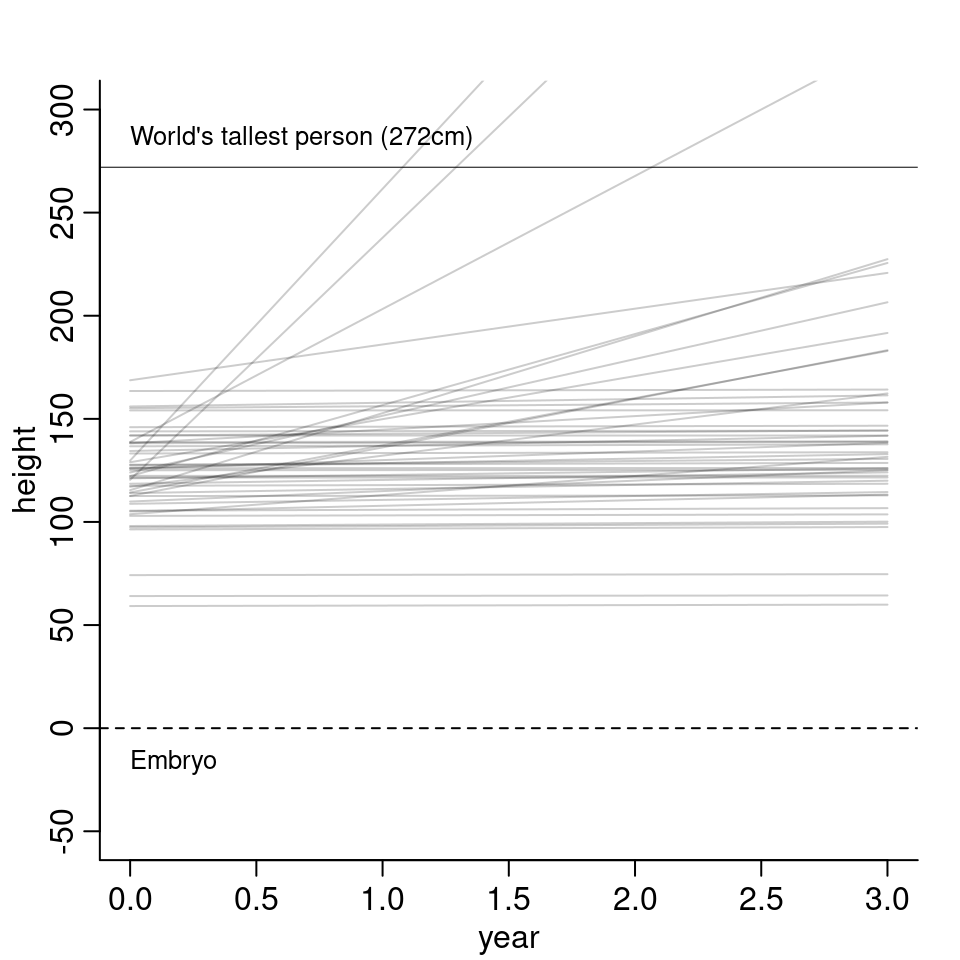 4M7. Refit model m4.3 from the chapter but omit the mean weight xbar. Compare the new model’s posterior to that of the original model. In particular, look at the covariance among the parameters. What is different?

Now, we refit an uncentered version of the model:

Now, there’s a quite strong negative correlation between the two parameters.

The same in visual: 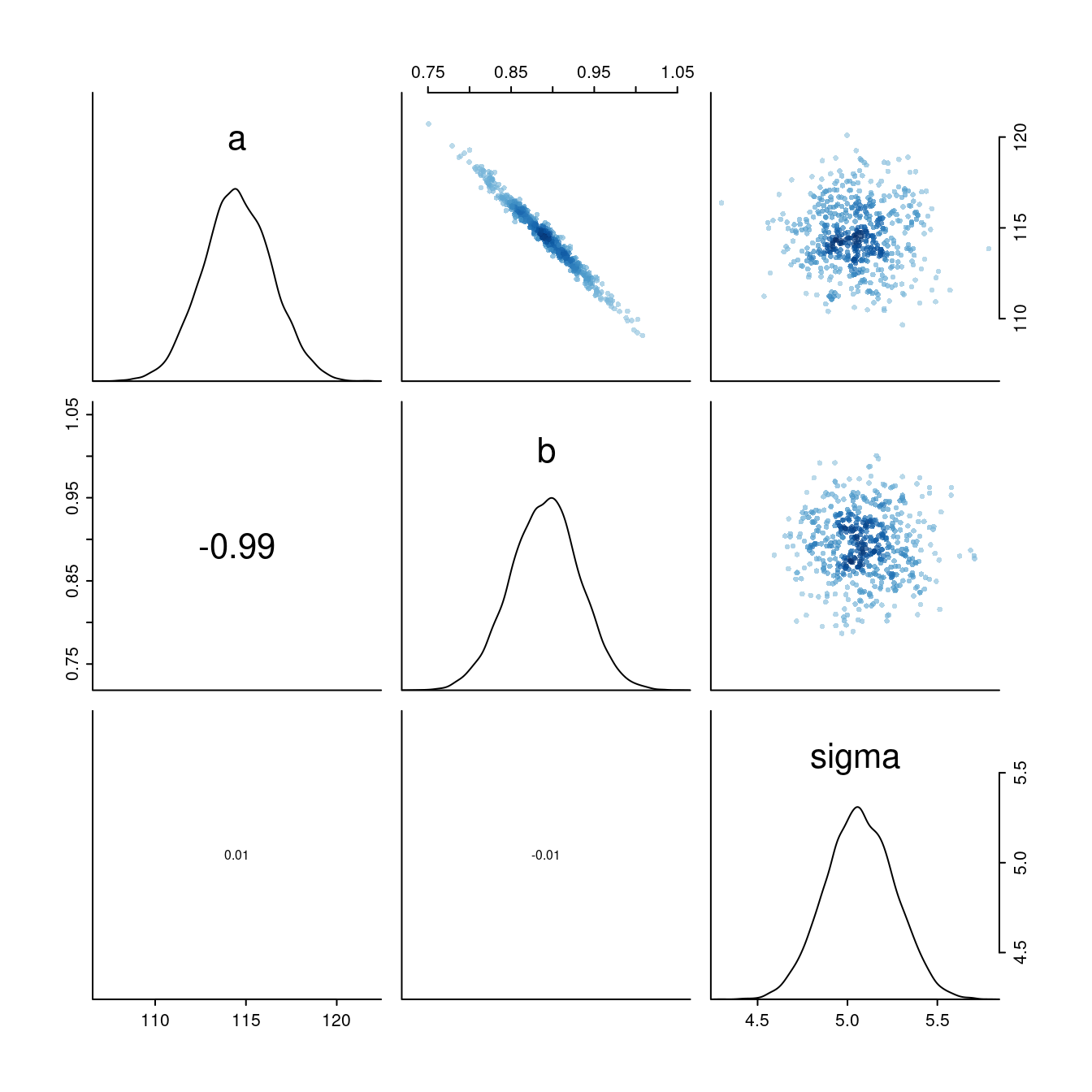 What is happening here? Every time the slope parameter increases a bit, the intercept changes in the opposite direction, i.e. decreases.

Compare the posterior predictions of both models: 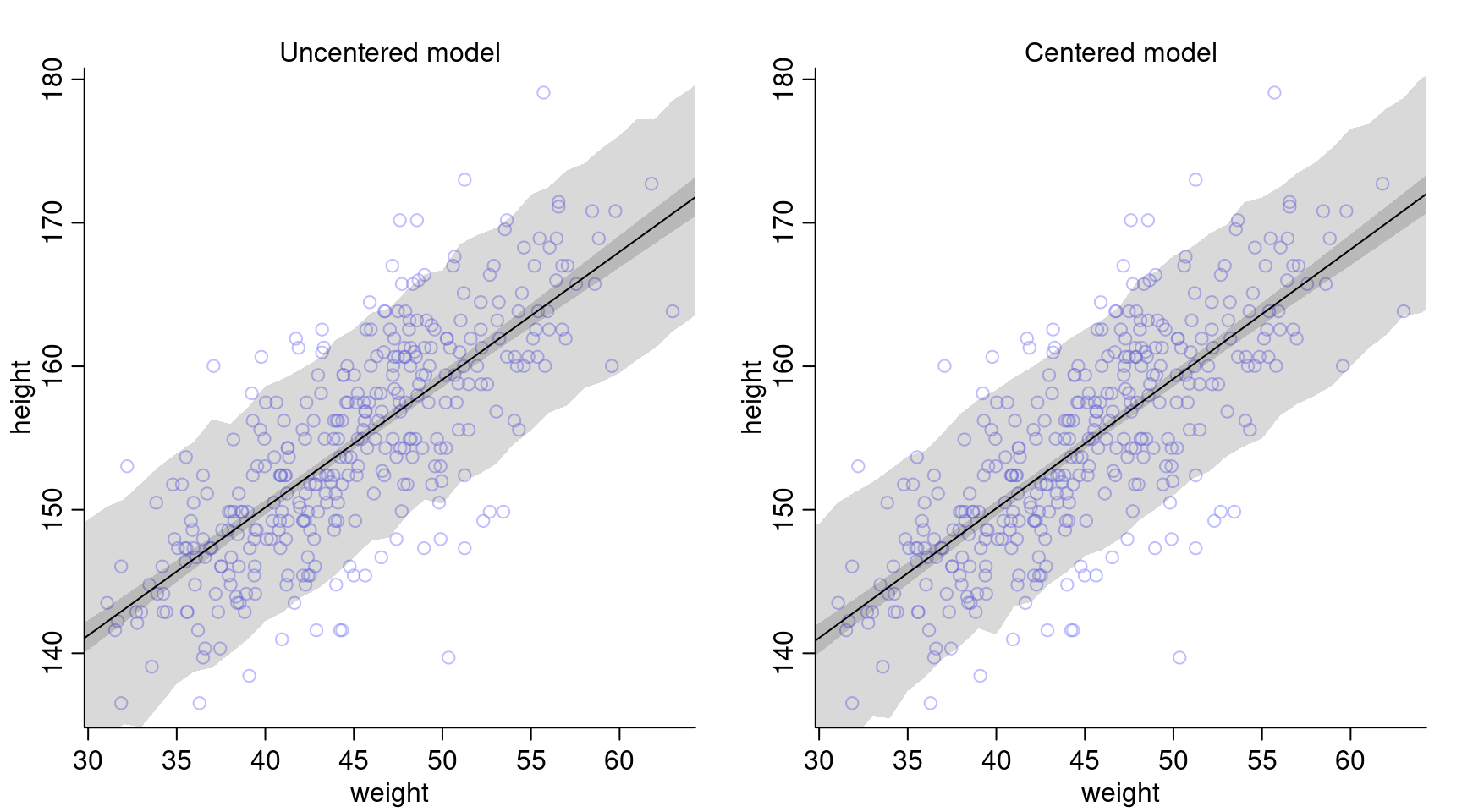 The posterior predictions look very much the same for both models.

4M8. In the chapter, we used 15 knots with the cherry blossom spline. Increase the number of knots and observe what happens to the resulting spline.

Just to be sure to see an effect, I’m going to double the number of knots to 30:

Compare this with the fit we had before with 15 knots:

It got even wigglier! This is a bit difficult to see because the curve with 15 knots and the narrower priors was quite wiggly but it can for example be seen at the end to the right.

More knots means there are more basis functions and so the curve can fit smaller local details. Fitting only a handful of knots will force the model to fit the more global trends:

The first hard questions use the !Kung data again, so we need to reload them:

For this, I reuse the model m4.3 from above and simulate heights for the individuals above by hand:

Computing the mean and 89% compatibility interval using PI() gives us:

4H2. Select the rows from the Howell1 data with age below 18 years.

I will use the same model as above but adapt the prior for \(\alpha\) to account for lower heights:

As above, since the weight values are centered, the intercept a corresponds to the average height, which is here 108.3. This is much lower than in the model above (but expected since the individuals in this data set are younger). The slope b is interpreted such that for every 10kg heavier, an individual is expected to be 27cm taller. The standard deviation sigma in this model is higher than in the one above, suggesting a higher uncertainty in the predictions.

We first compute the regression line by generating a sequence over the whole range of weights for which we then sample from the posterior distribution to compute a sample of mu, of which we can then compute the mean and the 89% PI. We similarly compute the 89% PI for the predicted height. 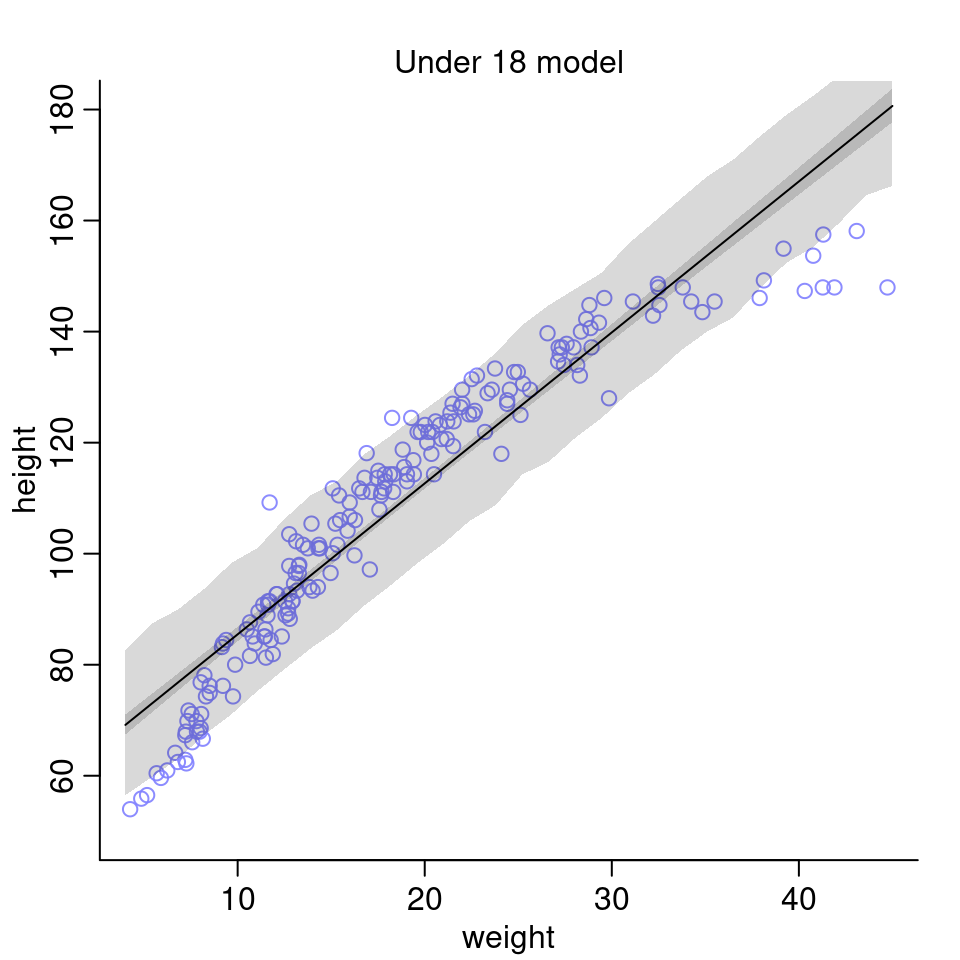 The linear model doesn’t seem to be a very good fit for the data. It performs very poorly for the lower and higher values of weight. One possibility to improve the model could be to use a polynomial model (e.g. of 2nd order) instead.

4H3. A colleague exclaims: “Only the logarithm of body weight scales with height!” Let’s try this out.

Interpreting these results is a bit more difficult since we transformed the weights using the logarithm. The intercept a corresponds to the average height of someone whose log-weight is equal to the mean of log-weights, i.e. whose weight is 31kg (this is equivalent to the geometric mean). How to interpret the b value? If we increase the weight by \(p\) percent (ignoring the centralization term for now), we get the following expression for \(\mu\): \[\begin{align*} \mu &= \alpha + \beta \log(\text{weight} \times (1 + p) ) \end{align*}\] Using some rules for logarithms, we get: \[\begin{align*} \mu &= \alpha + \beta \log(\text{weight}) + \beta \log(1 + p) \end{align*}\] That is, an increase of \(p\) percent in the weight variable is associated with an increase of \(\mu\) of \(\beta \log(1 + p)\). I personally find this not super intuitive, so let’s have a look at some plots as well. We compute again the mean \(\mu\) and its compatibility interval as well as simulate predictions for the height. 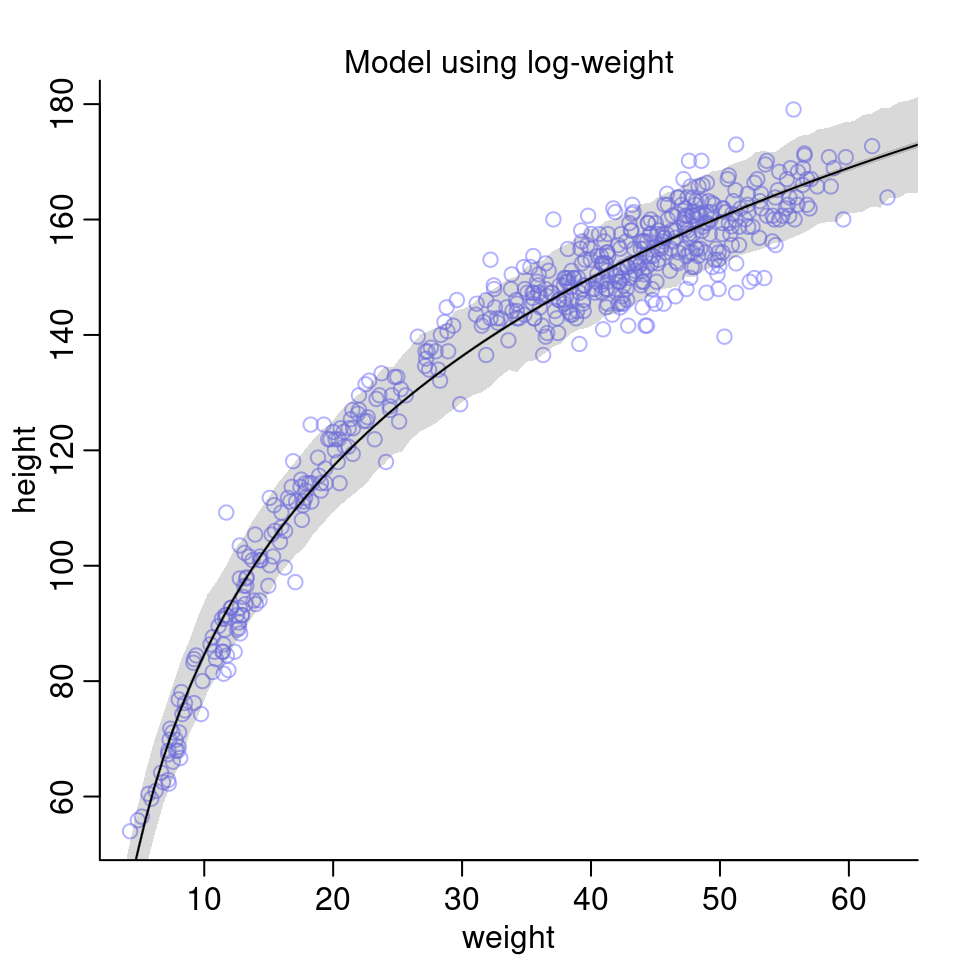 We can also visualize the model on log scale: 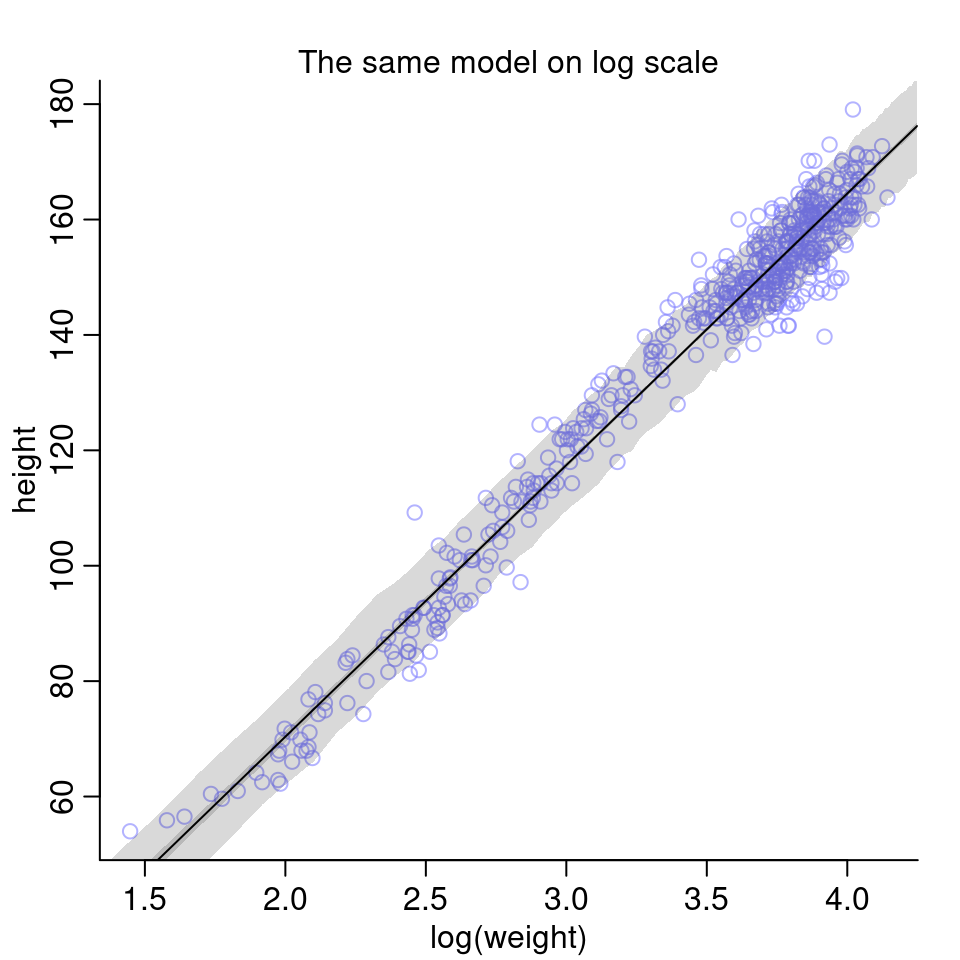 Given the last two plots, I’d say the colleague was right: The logarithm of body weight scales very well with height.

4H4. Plot the prior predictive distribution for the parabolic polynomial regression model in the chapter.

It suffices to generate samples from our priors and then plot the resulting curves: 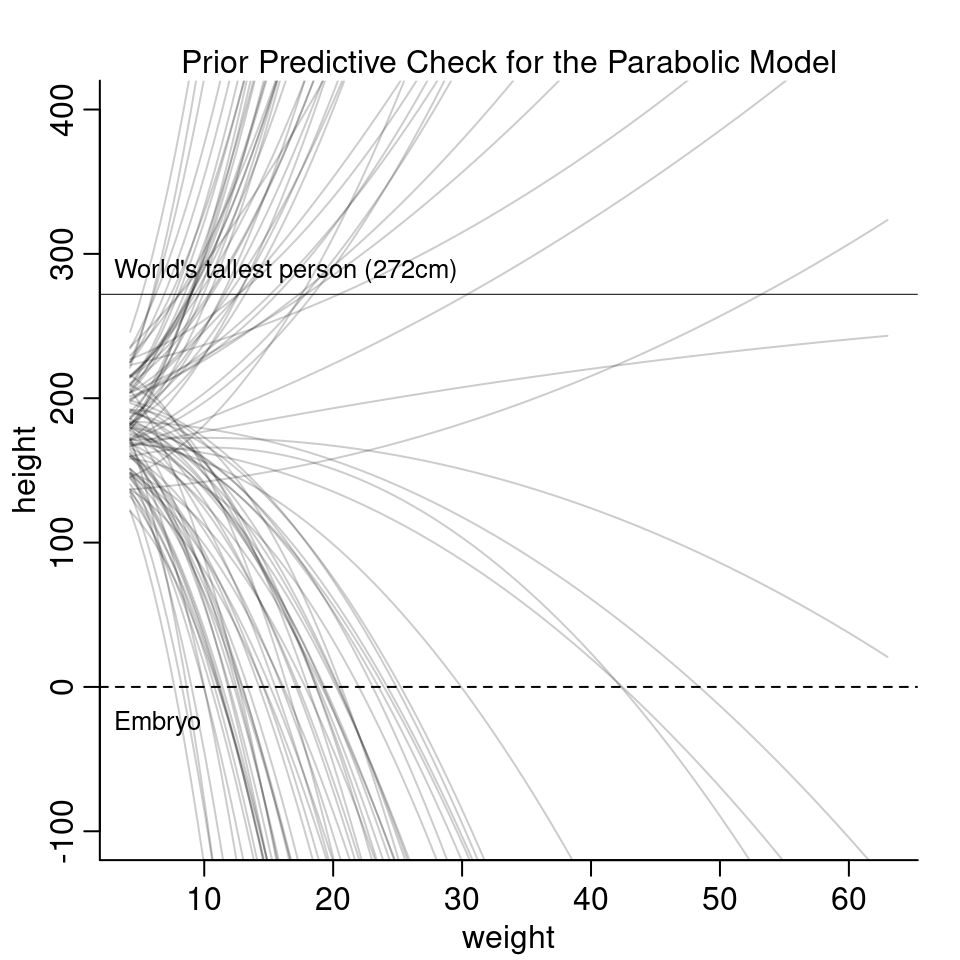 The curves are all over the place and it is hard to see much from it. The next part of the question asks to modify the priors in a way so that the prior predictions stay within the biologically reasonable space. 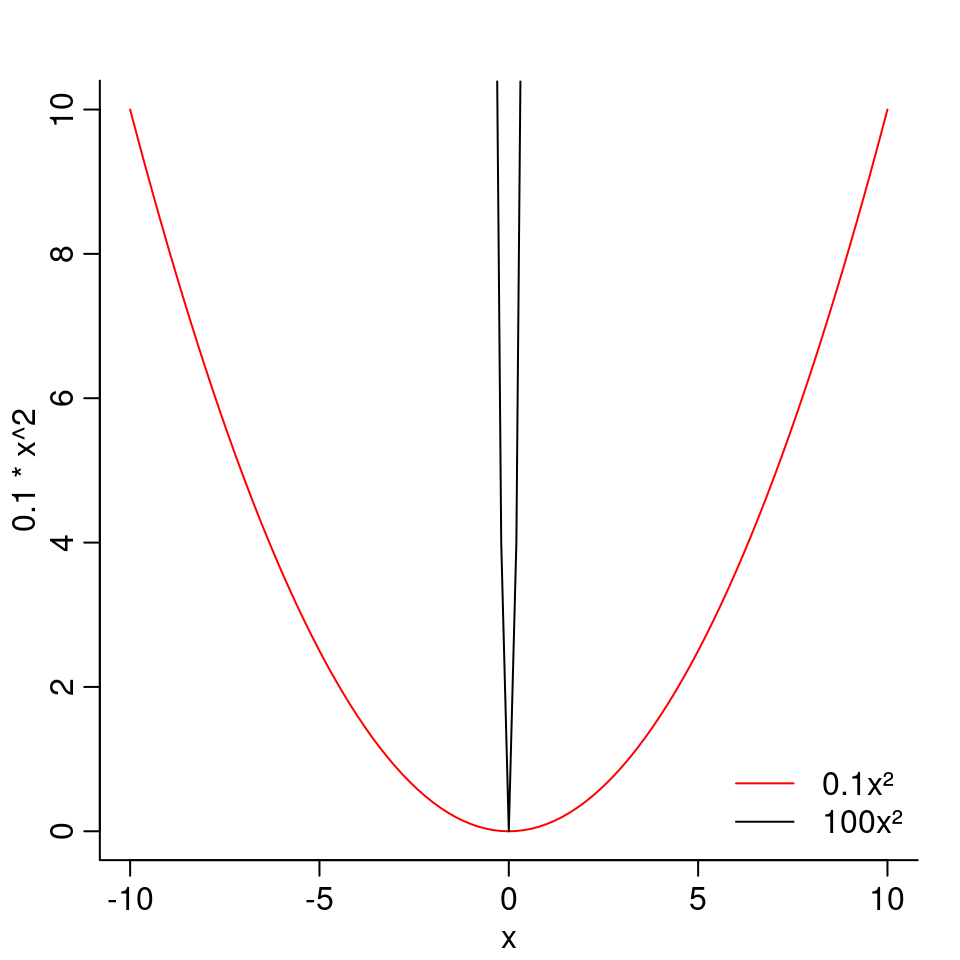 As a negative \(b_2\) would mean a downwards curve, we want \(b_2\) to be positive. To keep \(b_2\) positive, we can use the Log-Normal again. However, the standard deviation of the Log-Normal is a bit difficult to tune. A small standard deviation means the function is less skewed (has less values that are very high) but then it also has fewer values that are very small. Whereas a high standard deviation means there are many very small values but also a few very very big values. Overall, a distribution that is a bit hard to tune. I instead will use an Exponential with a high value for \(\lambda\). In that case, most values will be small.

With these priors, the prior predictions look as follow: 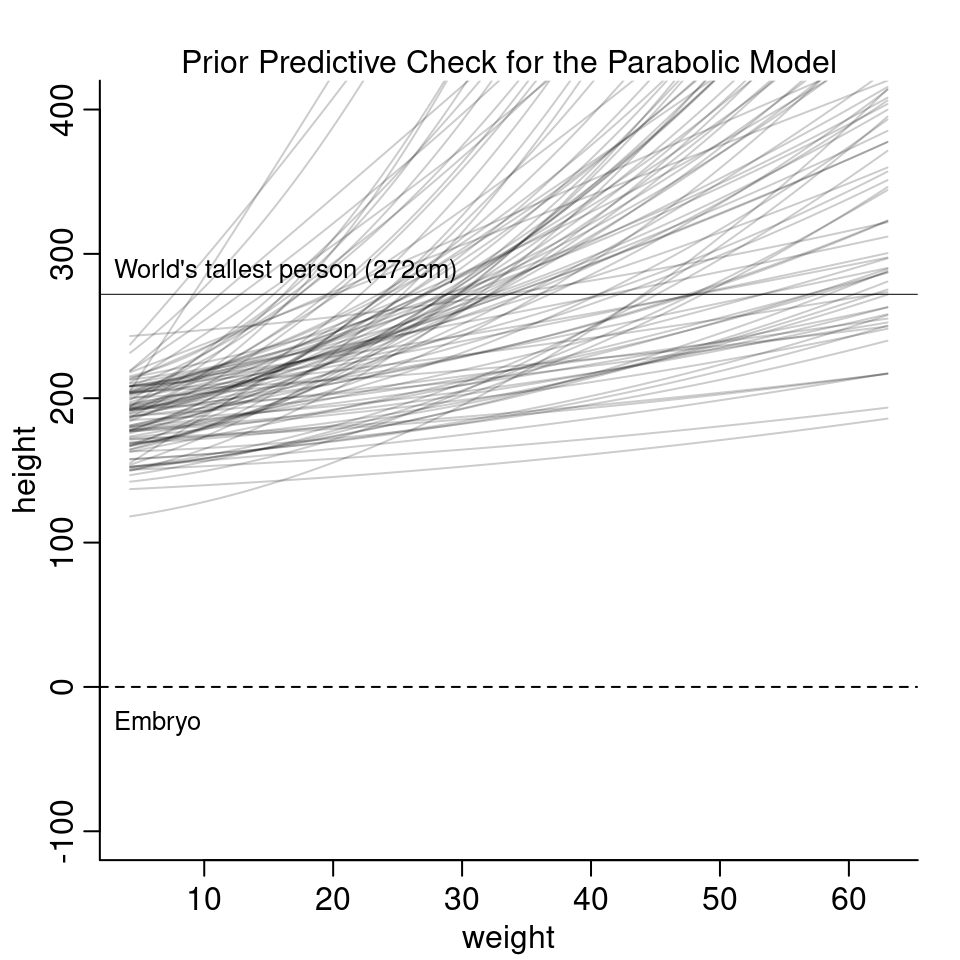 The new priors look more reasonable based on these curves. However, they are much more restrictive and it is hard to argue if the line should curve upwards or downwards. In the model fit in the chapter, the estimated parameter for \(b_2\) is actually negative and curves downwards for high values of weight. To summarize, getting the priors right and interpreting the parameters for a polynomial regression is really difficult.

4H5. Return to data(cherry_blossoms) and model the association between blossom date (doy) and March temperature. You may consider a linear model, a polynomial, or a spline on temperature. How well does temperature trend predict the blossom trend? 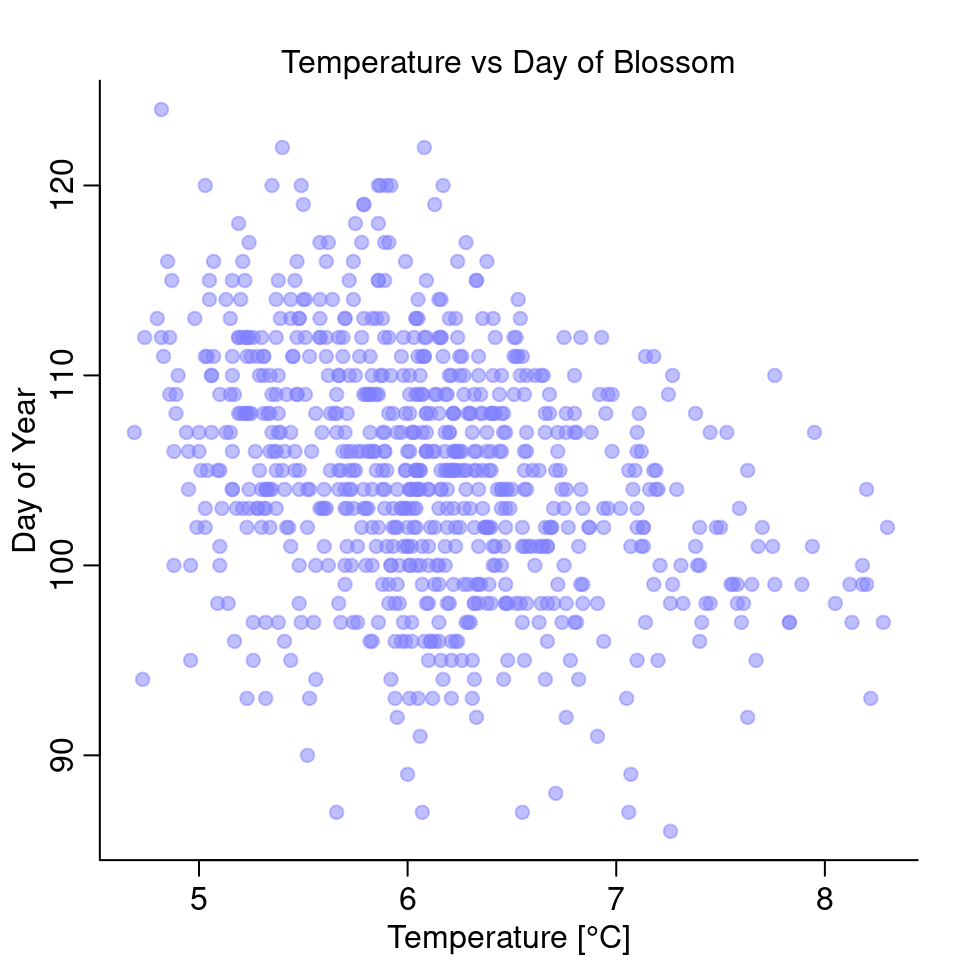 It looks like there is a negative relationship between the two: the higher the temperature, the earlier in the year does it start to blossom.

Since there are many missing values, I’ll restrict the data to cases where both doy and temp exist. 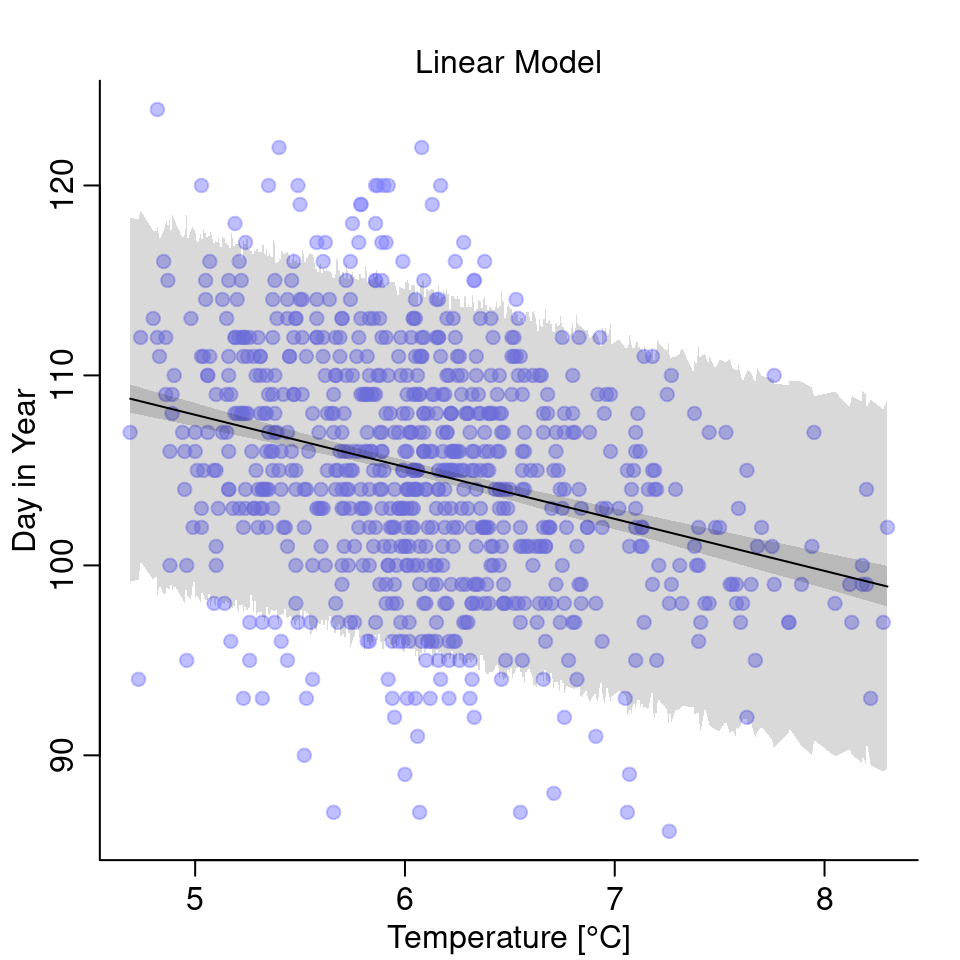 The temperature does have some effect on the day of first blossom but note that the uncertainty is quite high.

I will try both a quadratic and a cubic model.

And the cubic model: 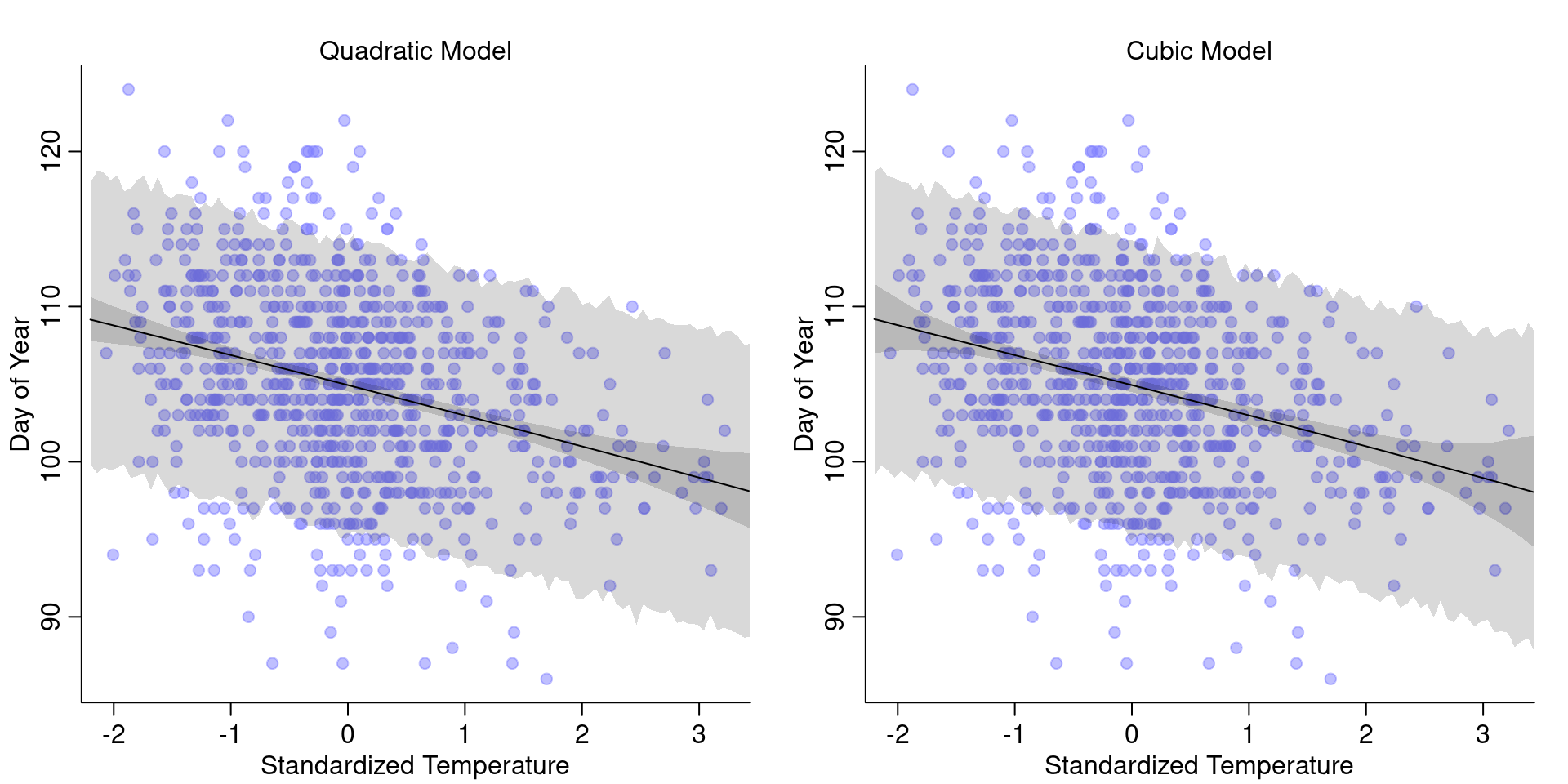 Interestingly, the two models look pretty much the same as the linear model. So we don’t gain anything from using a polynomial model, instead we only loose interpretability:

While the quadratic and cubic terms have very small parameters, almost close to 0, they still make the interpretation less forward. So in this case, nothing gained from polynomial regression.

Lastly, let’s also check out how splines perform for this example. I will use 15 knots and the same priors as also used in the chapter on the weight. 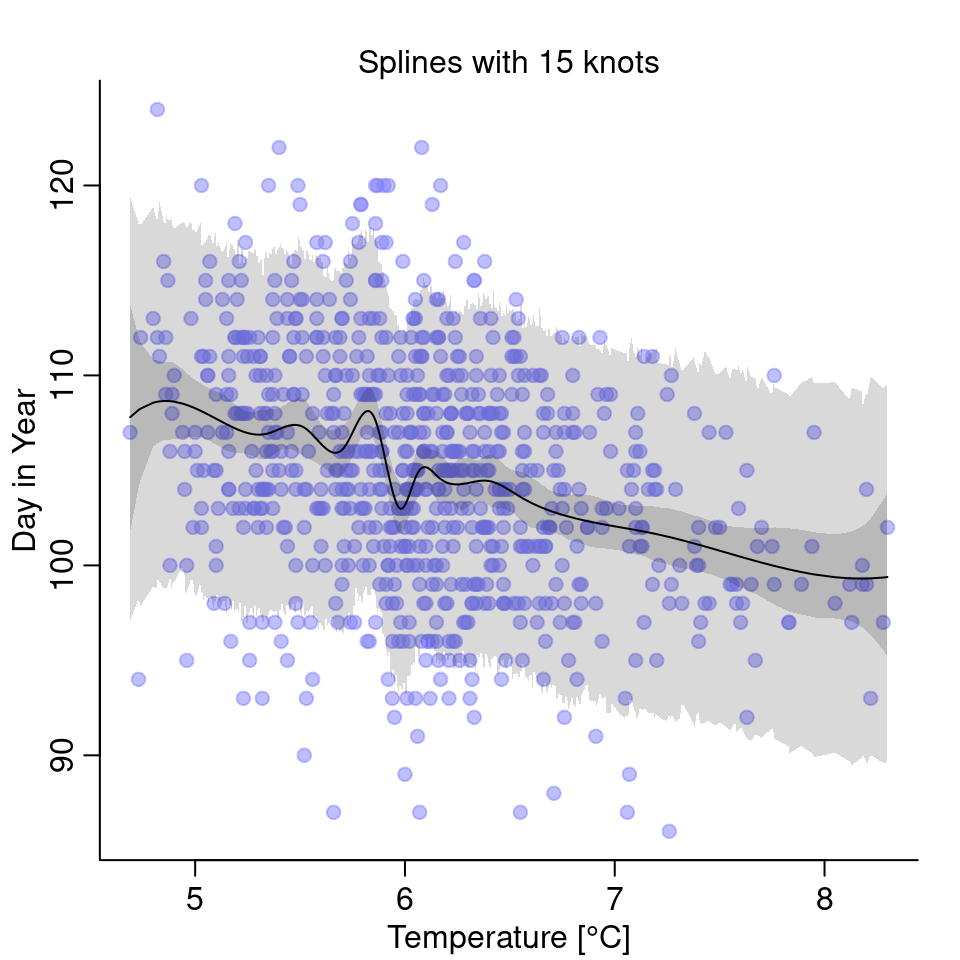 The splines are wigglier and have one especially weird dip just for temperatures below 6°C. Personally, I am skeptical this dip makes physically sense and it isn’t just an artifact of the splines being too wiggly. Comparing the three models, in this case, I’d go with the simple linear model.

I will only draw 10 different samples for each weight so that the plot won’t get too cluttered. 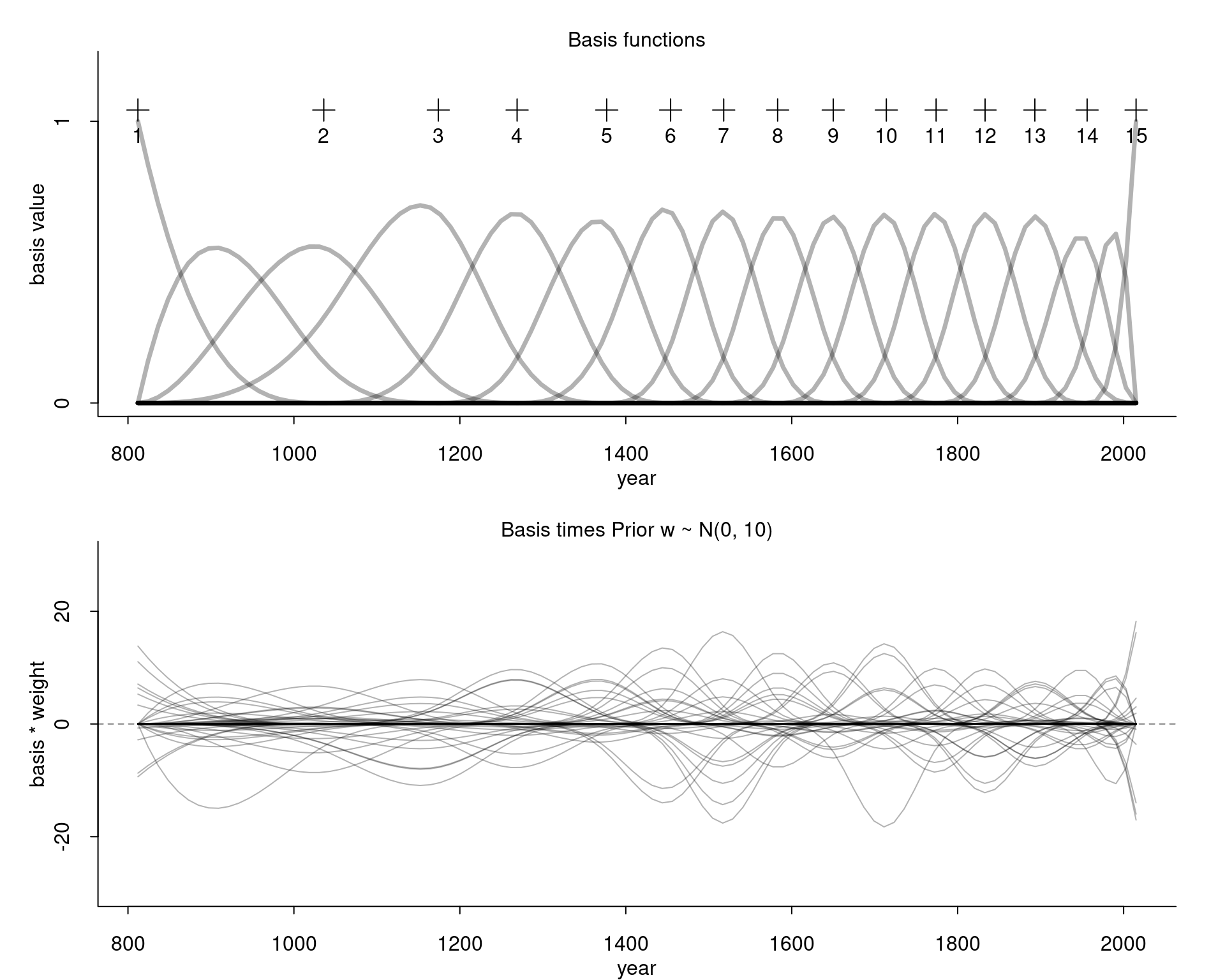 Compare this for example with the curves we get for our wider prior:

With this wider prior, the curve go much higher and lower. With the standard deviation of the prior we can thus control how high or low the curve can wiggle away from the mean.

Let’s see what happens if we just omit the intercept:

This almost worked, except that we now have that the splines seem to come from far down to the left. This is probably since we specified that the weights are distributed around 0: \(w \sim \text{Normal}(0, 10)\). Let’s fix this by changing the prior on \(w\) to this: $ w (100, 10)$. This is basically the prior we before had on the intercept.

Now, we basically got the same model as before that included the intercept.